I received product from Charlie Dawn Co in exchange for my honest review. However, all opinions expressed are 100% my own. I only promote what I truly love!

Since moving into our brand new home back in late November, I’ve slowly but surely been collecting a few fun farmhouse pieces to fill our living spaces with that gorgeous rustic charm that I’ve absolutely fallen head over heels in love with. The moment I set out on my quest to find farmhouse decor to fit my style and my budget, it quickly became very evident to me that pretty things can cost a pretty penny, and it didn’t take long before I started to feel a little defeated in my quest to fill my house with all things farmhouse-chic. I mean, I just wanted it to look like Joanna Gaines is my bff and she popped over to help me spruce up the place…is that so much to ask?! 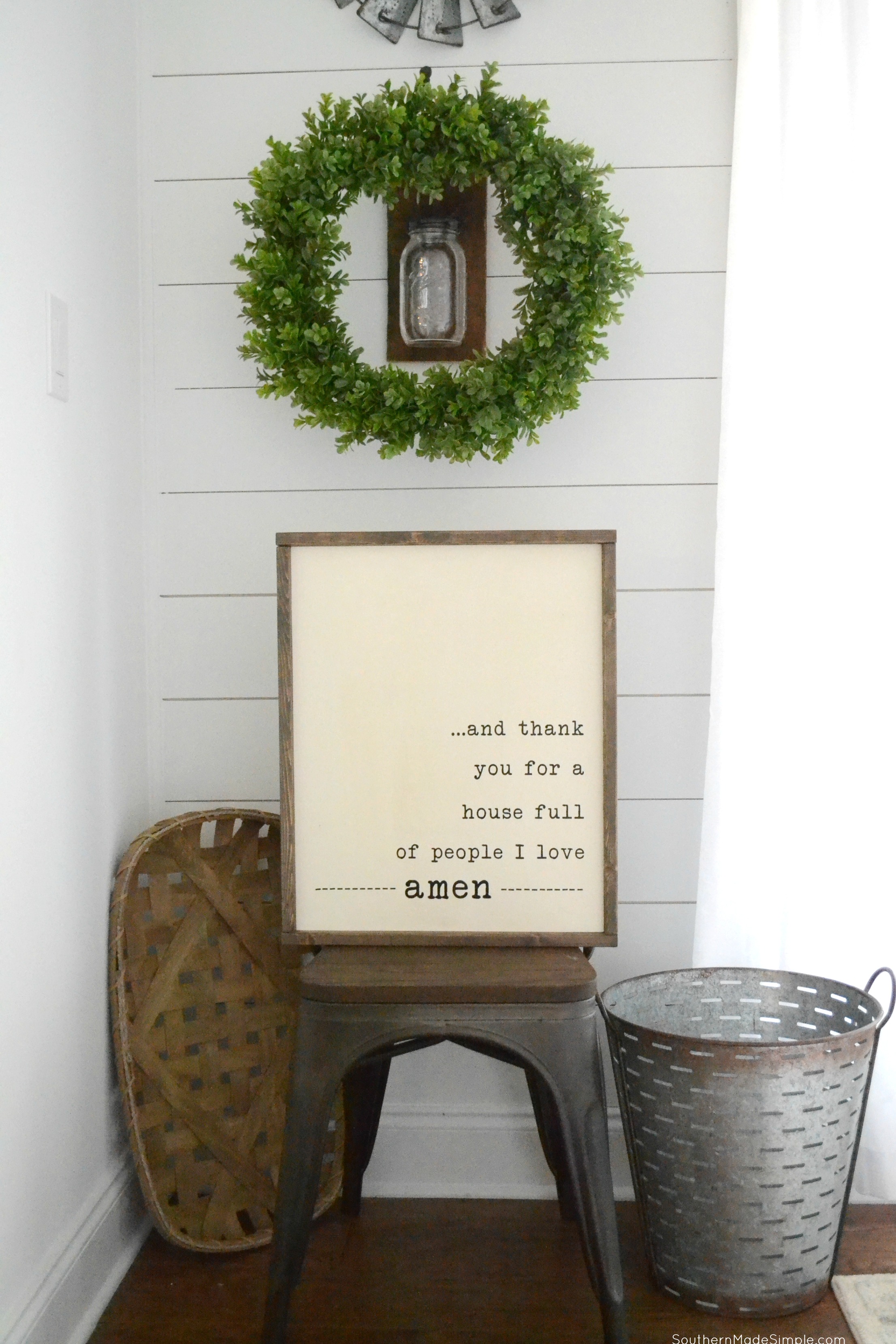 END_OF_DOCUMENT_TOKEN_TO_BE_REPLACED

This post has been sponsored by Febreze ONE and its advertisers. Compensation was provided for this post, but all thoughts and opinions expressed are 100% my own.

Ah, the joys of pregnancy. The morning sickness, the ever-expanding waistline, the random food aversions and cravings, and the unusual superhuman power to be able to smell things from what seems like a mile away. Pregnancy can be so strange, can’t it? I mean, WHY do I have to have such a sensitive nose to things that would’ve normally never bothered me? And WHY do I want to eat nothing but nachos and macaroni and cheese all the time? I’m slowly accepting that there are just some things in life that I’ll never understand, but over the last few days I’ve been rejoicing over one product in particular that has made me much more comfortable in my own home, and it’s been such a breath of fresh air!

END_OF_DOCUMENT_TOKEN_TO_BE_REPLACED

Compensation was provided by I See Me in the form of product. All opinions expressed are 100% my own.

Growing up, Easter was always such an incredibly fun time in our household. We’ve always celebrated the death and resurrection of Christ Jesus (the most important time of the year in our opinion,) and my mother would often spare no expense in making sure that all of her children had an Easter Basket that was overflowing with sweet treats, money eggs and the cutest little seasonal gifts to fit our personalities. Running downstairs and finding our baskets before church service was always such a treat, and the annual Easter egg hunt that soon followed was always a memorable experience! I always knew I wanted to keep these fun traditions alive when I had children of my own, and for my little one’s 3rd Easter celebration, we’re going big!

END_OF_DOCUMENT_TOKEN_TO_BE_REPLACED

The post has been sponsored by Ivory Soap and its advertisers. All opinions expressed within this post are 100% my own.

There was a time in my life where my shower routine was anything but “routine.” I showered at whatever time of day I pleased, and I stayed in the warmness of those steamy tub walls for as long as I wanted to. There was even a point in my life where I was sometimes able to take relaxing bubble baths to help me rest and unwind after a long, hard day. I could listen to music while I soaked and tuned out all of the stresses of the world for as long as I was in the bath, and it was absolutely blissful! At that point in my life, not only was my shower routine one of obvious necessity for cleanliness, but it was also a form of sacred “me time” that I was in complete control over. Man, those were the days!

Since becoming a mom, those days have long sailed away. I’ve become completely aware that I likely won’t have such an extravagant shower routine again until all of my children have left the nest, but in so many ways I can’t help but think that my new shower routine is actually much better than it was all of those years ago! Do I get to take lengthy showers whenever I feel like it? Absolutely not. Do I have uninterrupted time to bathe without a little one poking their head in the curtain to ask me a hundred questions? Not a chance.  Do I get to rest and relax in a hot bubble bath and tune out the world? Only in my dreams!

But yet, even on the days where my shower time is hurried and interrupted, I still am able to give myself a bit of “me time” before moving on to the new things in my life that truly matter the most! 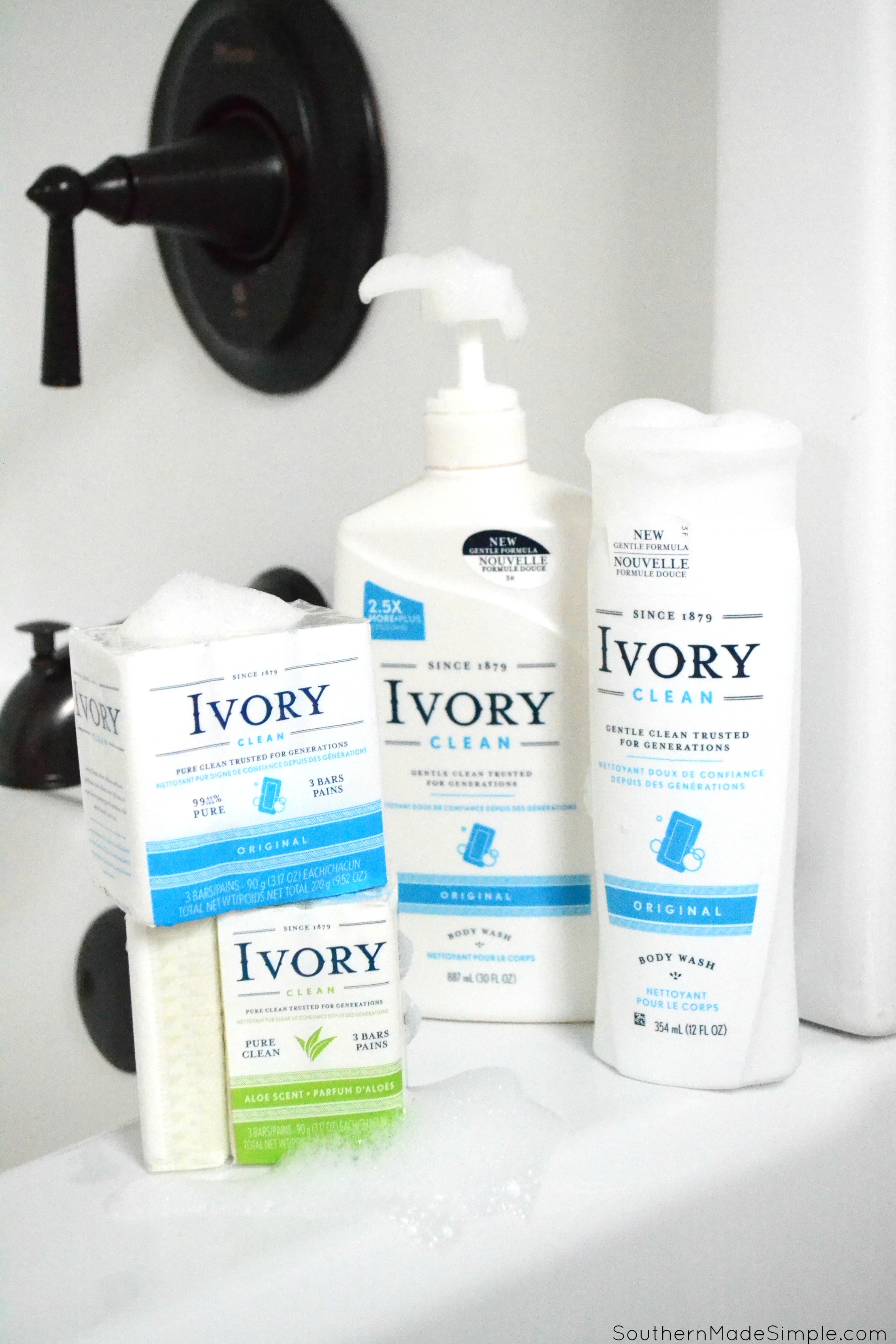 END_OF_DOCUMENT_TOKEN_TO_BE_REPLACED

This post was sponsored by Funky Chunky® as part of an Influencer Activation for Influence Central and all opinions expressed in my post are my own.

It’s no secret that there’s something sacred about game days and football here in the south. We love to celebrate big during game days, and we especially like to show up and show out during championship games, playoffs and bowl games! We’re still living it up big after a majorly successful year of collegiate football here in the great state of Alabama, but now we’re switching gears and are huddling up for The Big Game at the professional level coming up in February!

END_OF_DOCUMENT_TOKEN_TO_BE_REPLACED

Affiliate links are included throughout this post at absolutely no cost to you.

Once the Christmas decor is taken down from the shelves in stores, heart shaped boxes of chocolate, stuffed animals and candy hearts immediately start taking their place in preparation for Valentine’s Day. In previous years I’ve never decorated much for Valentine’s Day, but it’s mostly because I’ve never found much Valentine-y decor that I actually liked. A few years ago I posted a roundup of a few of my favorite Valentine’s Day Farmhouse Decor finds that I scored on Amazon (my favorite place to shop) and this year I was really pleasantly surprised at their selection of pillow covers!

END_OF_DOCUMENT_TOKEN_TO_BE_REPLACED

This is a sponsored post written by me on behalf of Ricola Dual Action Honey. All opinions are 100% mine.

This is a sponsored post written by me on behalf of Ricola Dual Action Honey. All opinions are 100% mine.

We’ve been moved into our home for exactly 6 days now. I use the term “moved in” pretty loosely, seeing as how so much of our stuff is still in boxes and is very slowly beginning to be opened. We moved into our brand new home that we’ve been building for a full year exactly 2 days before family came over to stay the night for the Thanksgiving holiday. It was such a joyous time to get to host my family in our home that we’re so very proud of, but there’s no denying that it was pretty stressful, and my body felt like it was moving non-stop day in and day out! 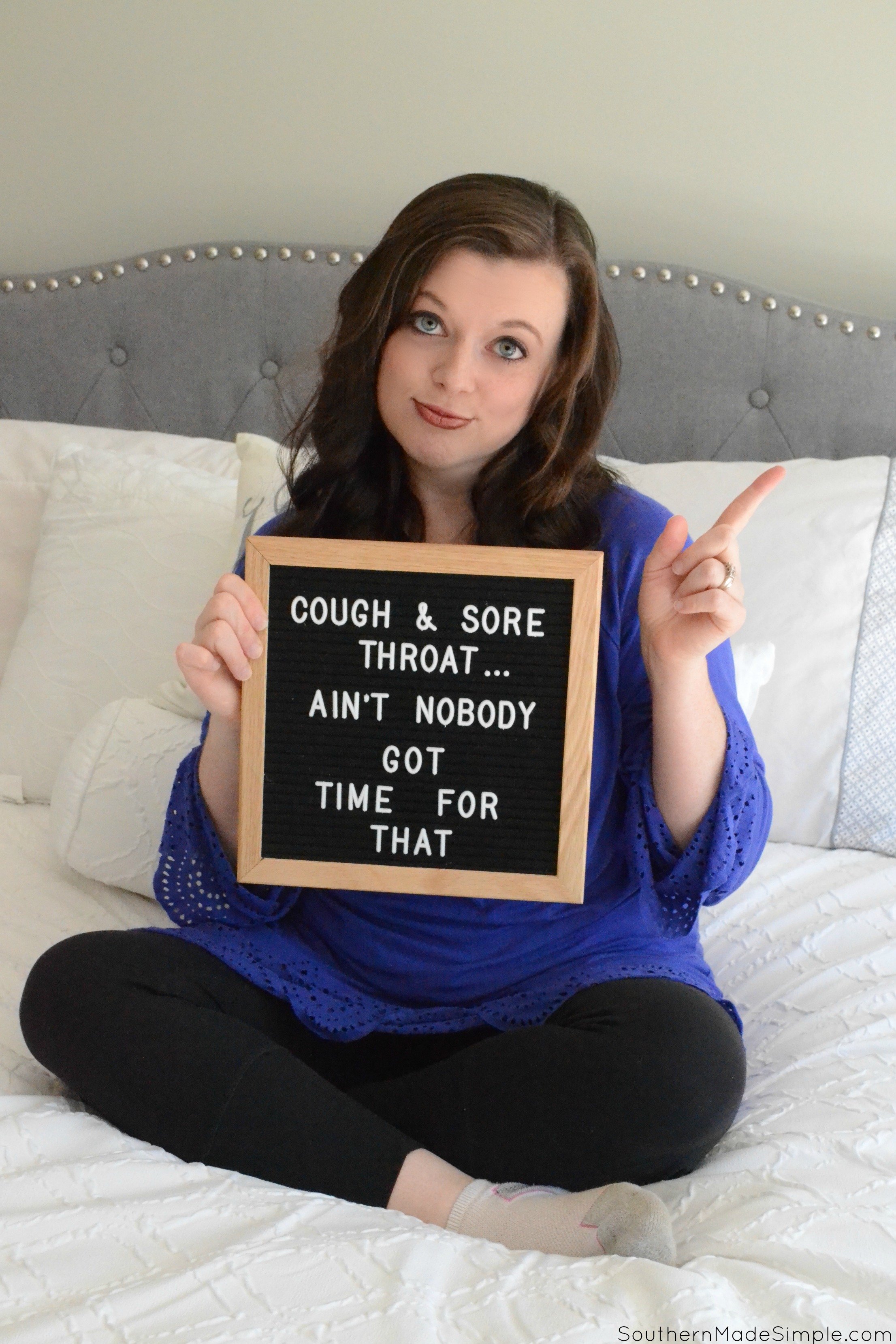 END_OF_DOCUMENT_TOKEN_TO_BE_REPLACED

This post was sponsored by GOJO, the makers of PURELL® Multi Surface Disinfectant, as part of an Influencer Activation for Influence Central and all opinions expressed in my post are my own.

We’ve been a bunch of busy bees buzzing around our nest getting things ready for a family Christmas gathering taking place at our house tonight! Even though we’ve been in our brand new home for less than a month, there was still a lot of tidying up that needed to take place (and a lot of cardboard boxes that needed to be hidden away in the closets, let’s just be real!)

END_OF_DOCUMENT_TOKEN_TO_BE_REPLACED

Thank you to The UPS Store for sponsoring this post. Make the holiday to-do list a little easier this season with The UPS Store!

We’re all still grinning from ear to ear over getting to host my family in our brand new home during Thanksgiving this year. It was so nice having all of my siblings and their families in one place, and it was amazing being able to finally sit down and relax in our brand new home after a full year of construction. Now that we’re heading into Christmas, things have gotten a little bit quieter around here as two out of my 3 siblings and their families will be celebrating the season with other family members far away.

END_OF_DOCUMENT_TOKEN_TO_BE_REPLACED

This shop has been compensated by Collective Bias, Inc. and its advertiser. All opinions are mine alone. #LoveYourPC #CollectiveBias

When I had my daughter 2 1/2 years ago, I decided to leave my full time job and stay home with her. I had always dreamed of being able to be at home with my children during their early years, and I knew if I had the opportunity to leave the workforce then, I needed to take the leap and do it. Parenthood opens your eyes to so many things that you never know about yourself. I learned very quickly that Mom-in’ ain’t easy, and that I was actually way more busy staying at home with her than I was working full time! I uncovered strengths I never knew I had, and dreams for myself and my children began to quickly unfold. Just 6 months into being a stay-at-home mom, I started my own business and began the transition from stay-at-home mom to work-at-home mom. 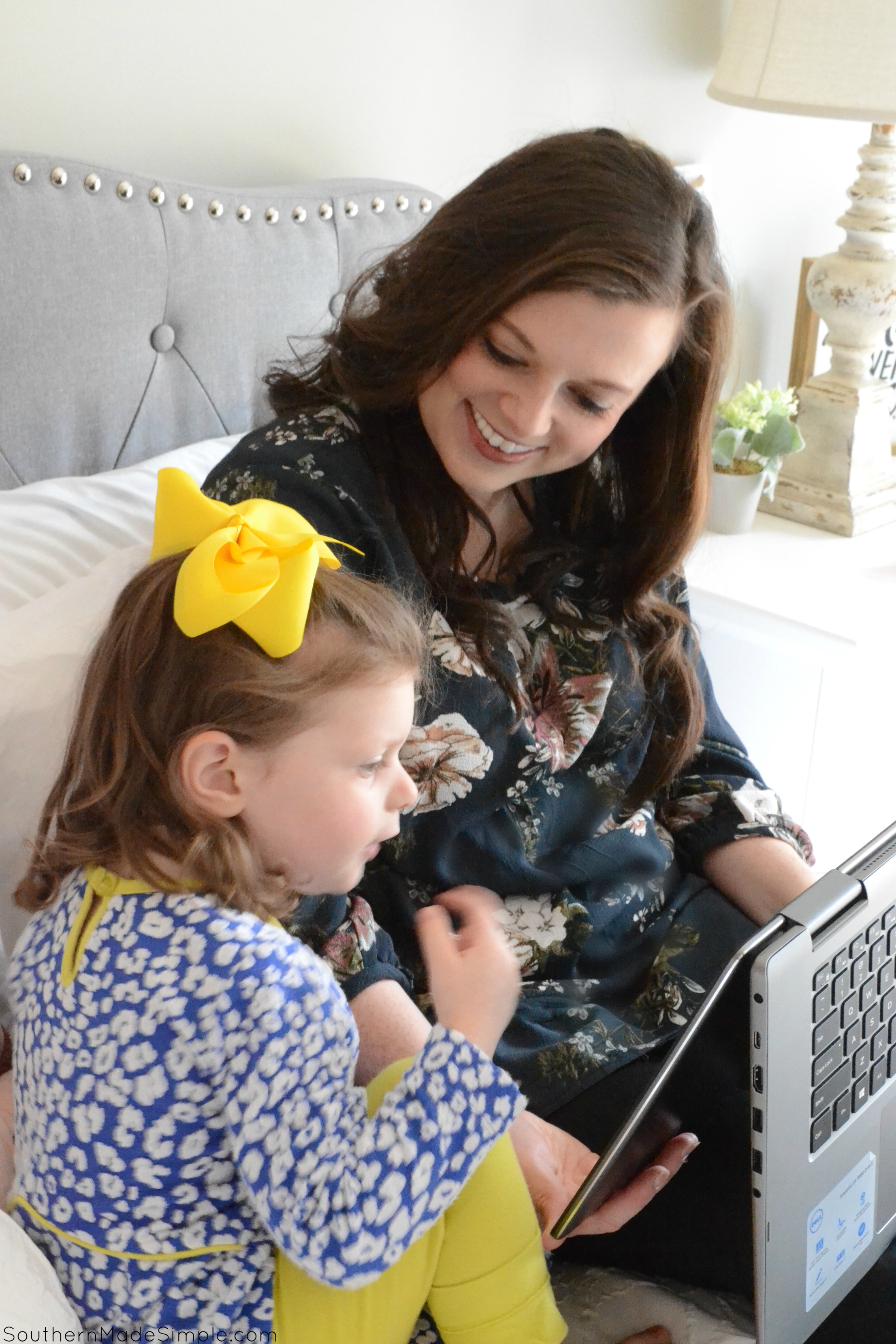