There’s just something about a big golden sweet potato with butter and brown sugar that gets me so excited. I absolutely love sweet potatoes, so naturally when November rolls around I start planning my entire Thanksgiving menu around them. You may have seen me recently post about how I like to spice them up every once and a while, but sometimes I like to stick with something a little more traditional, too. 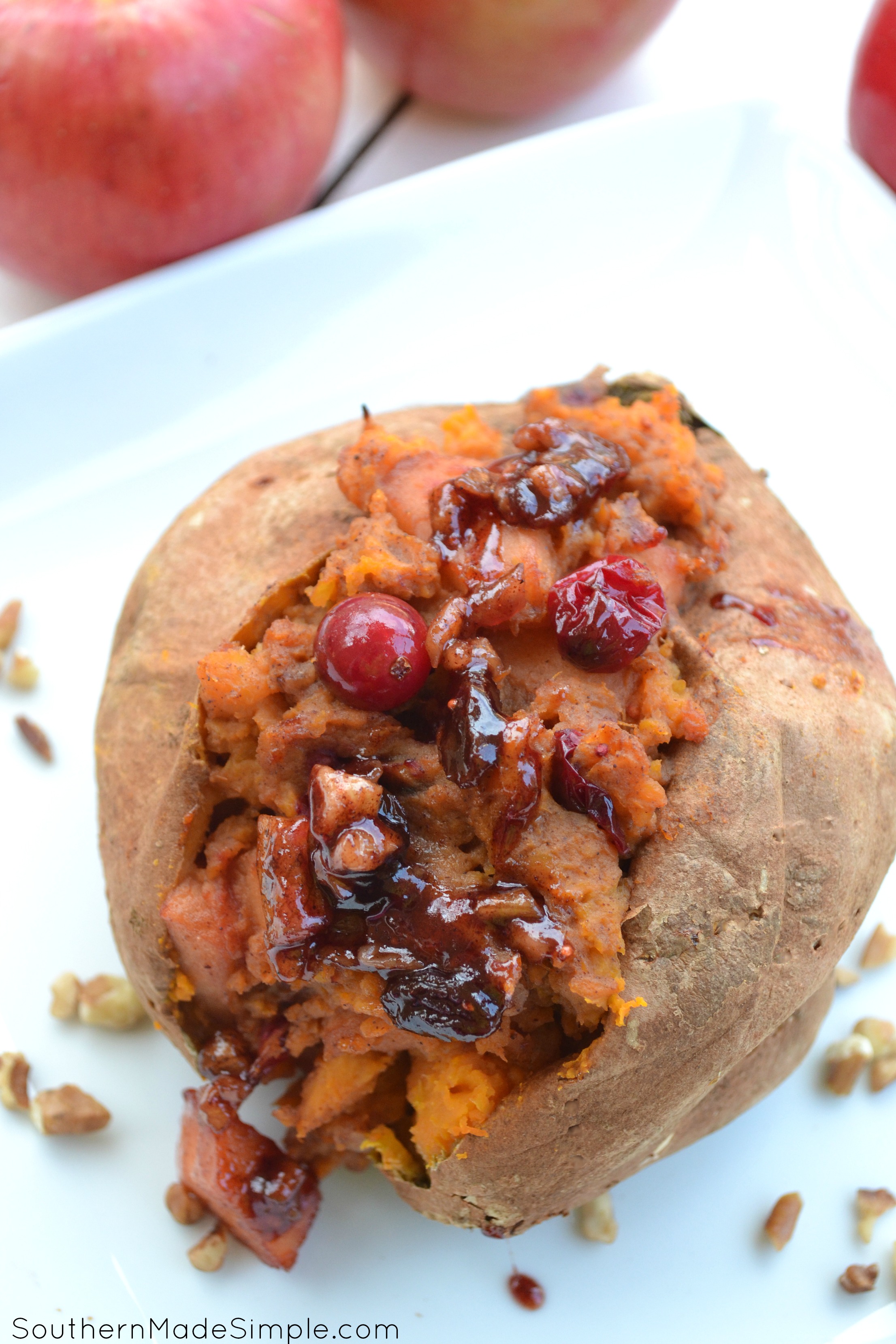 One of the grocery stores I like to shop at had a mega sale on their produce last week, and I picked up a 5lb bag of beautiful delicious red apples for just 99 cents. Crazy, right?! When I got home and began unloading the groceries, I thought I’d peel a few and make my delicious Cinnamon Glazed Stewed Apples, but as I reached to grab my bottle of cinnamon, a few lonely sweet potatoes caught my eye. I decided to see what kind of magic I could come up with by combining the two together, and I’m pretty sure I landed in sweet potato heaven with this one, y’all!

I preheated my oven to 425 F and scrubbed the potatoes until they were clean. I poked a generous amount of holes in each one and placed them on a foil lined cookie sheet and baked them for about 1 hr 15 minutes. 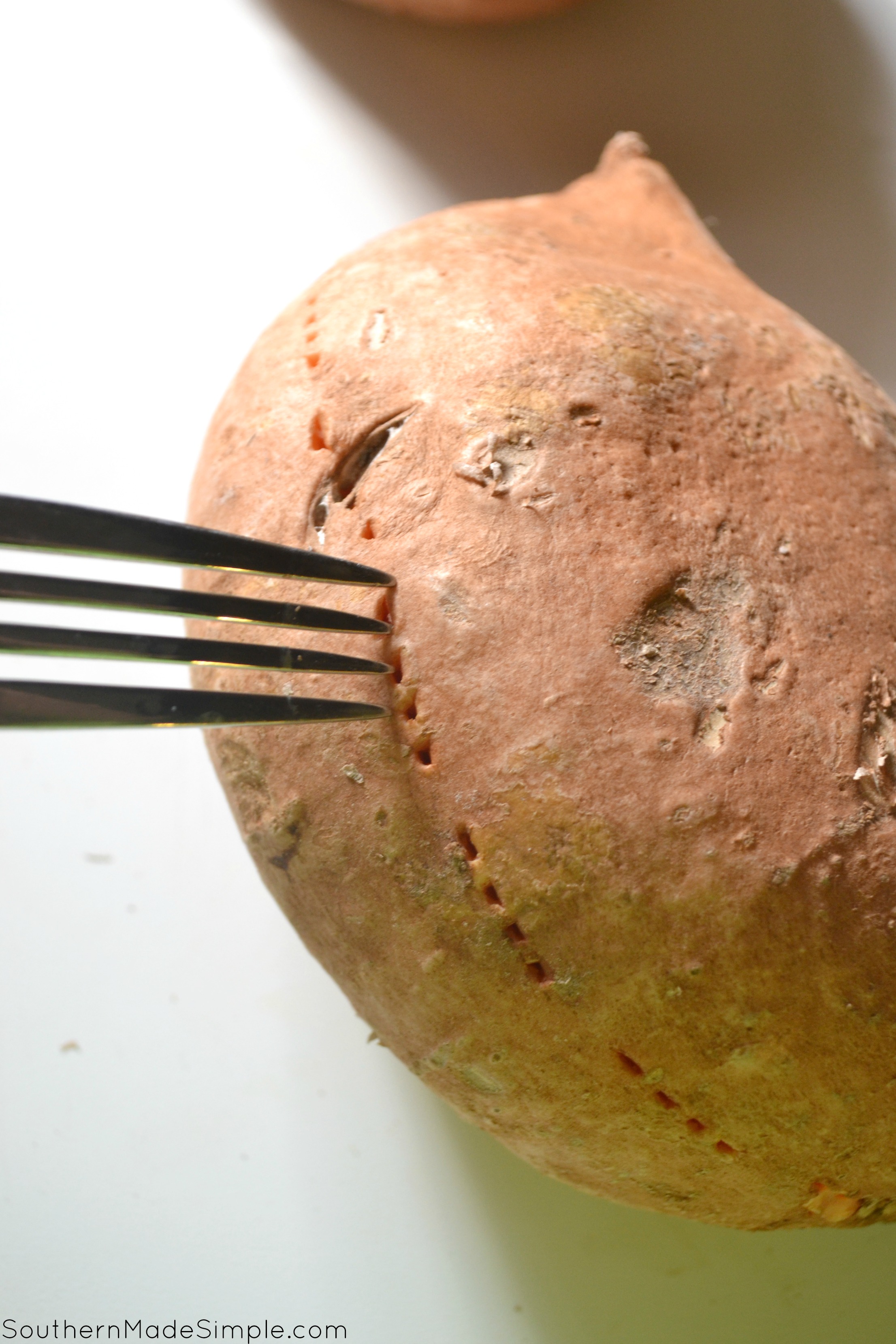 While the potatoes were baking away, I peeled one large apple and sauteed it in a little bit of butter. I added in some raisins, fresh cranberries and a handful of chopped pecans and let them simmer a little longer in the butter.

I then added in some brown sugar and cinnamon and let it all come together until the apples were soft with just a tiny bit of crunch left in them. 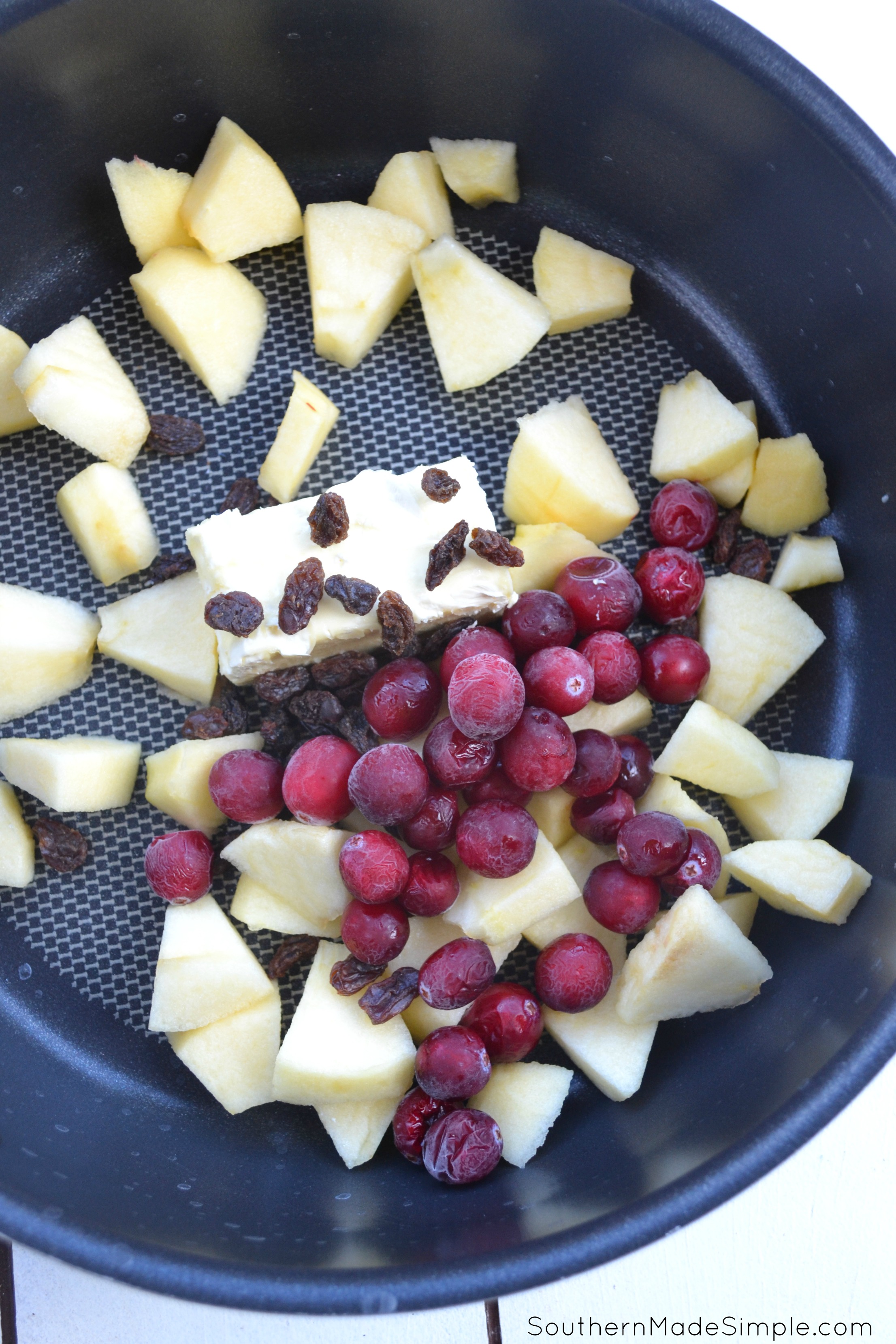 My house smelled SO amazing while this delicious concoction was bubbling. I could barely wait to let it cool down because I wanted to lick the spoon so bad! The cranberries gave it a really nice extra touch. You have to watch out when you cooking them on the stove, though. They’re known to POP open and splash juice at you when they get hot! 😉 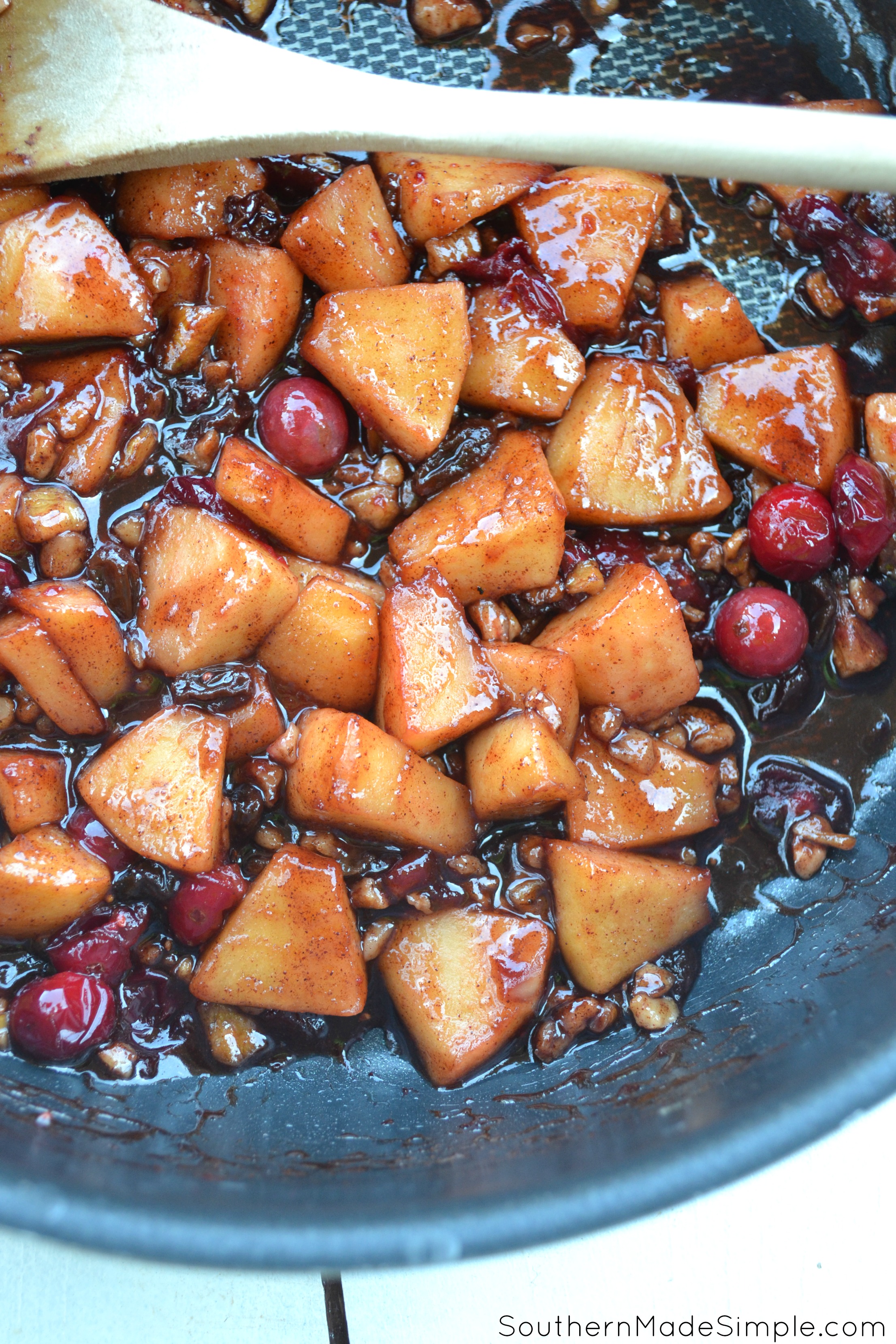 Once the potatoes were completely done all the way through, I let the cool briefly and sliced each one open down the middle. I scooped the inside of the potatoes into a large bowl and poured in the brown sugar and apple mixture, reserving a little bit for topping. After giving it a good stir, I spooned the filling back into each potato and baked it for a few more minutes (10-15) in the oven heated at 350 F. 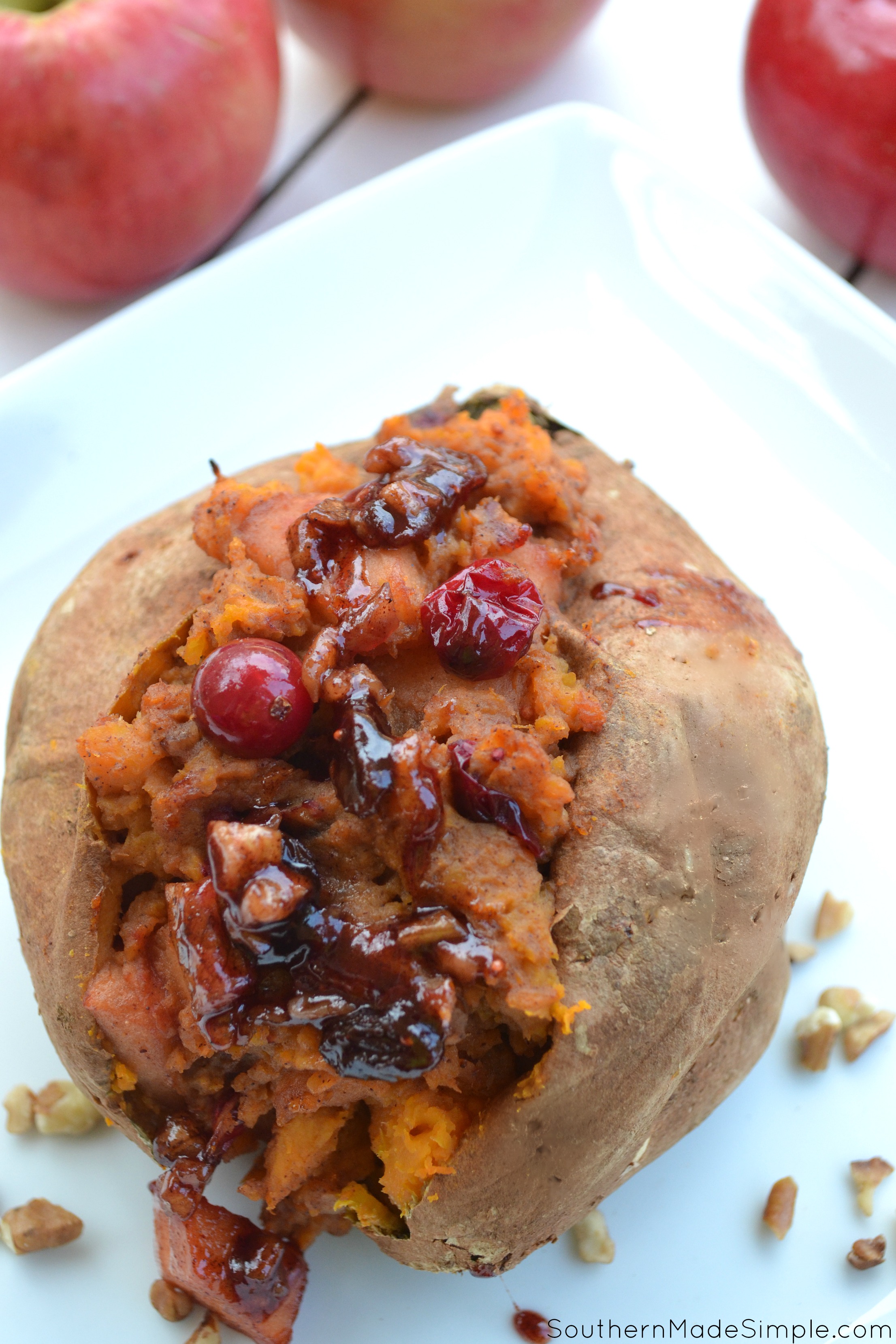 I sprinkled a little extra cinnamon and a few pecans on top to give it a little extra goodness. I always love finding a new way to prepare sweet potatoes, and this one is definitely a winner with me!

Do you love sweet potatoes as much as I do? Do you have a fun new recipe using sweet potatoes that you’d like to share? If so, I’d love to hear about it!