These Apple Pie Cheesecake Trifles are a simple, no-bake dessert that are perfect for the 4th of July!

They say there’s nothing more American than homemade apple pie, and throughout the years it’s become an iconic representation of American culture that is enjoyed all year round – especially on the 4th of July. There are few things better than enjoying a sweet and delicious golden apple pie with a flaky buttery crust and a scoop of vanilla ice cream on top. The thought alone is enough to make anyone’s mouth water! And because I love a classic apple pie as much as the next person, it’s really no surprise that it stands as the inspiration behind my latest recipe concoction: Apple Pie Cheesecake Trifles. 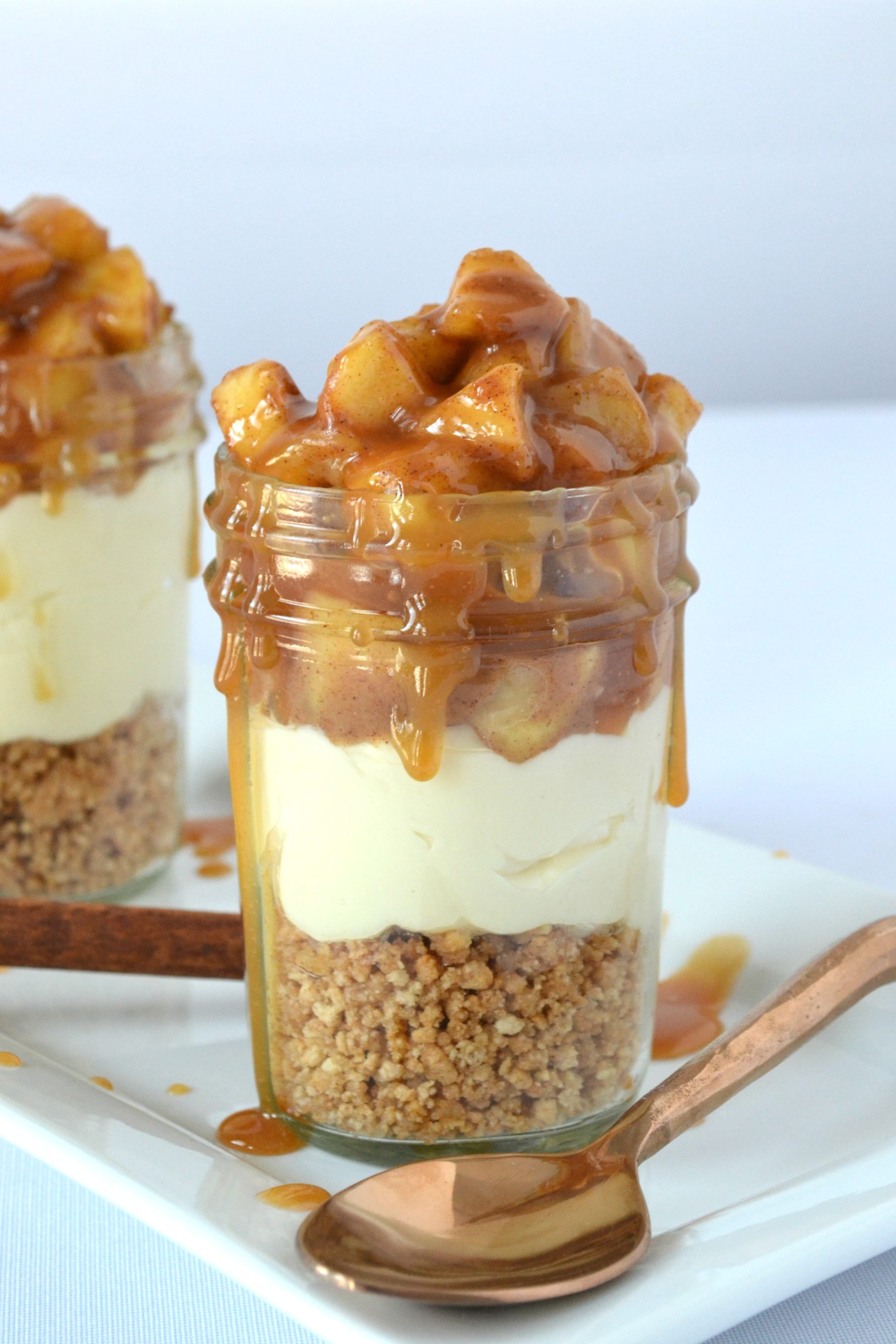 I always love a good twist, and these apple pie cheesecake trifles are a really fun twist on the classic apple pie! The best part is that there is absolutely no baking required, so you can free up your oven for other things on your 4th of July menu. The inspiration for these trifles struck one day when I was eating a slice of cheesecake with strawberries on top. Most of the time when you order a slice of cheesecake off of the dessert menu in a restaurant, it comes with a sugared strawberry glaze on top. I started brainstorming other toppings to serve with cheesecake, and the classic apple pie filling was the first thing to come to mind! 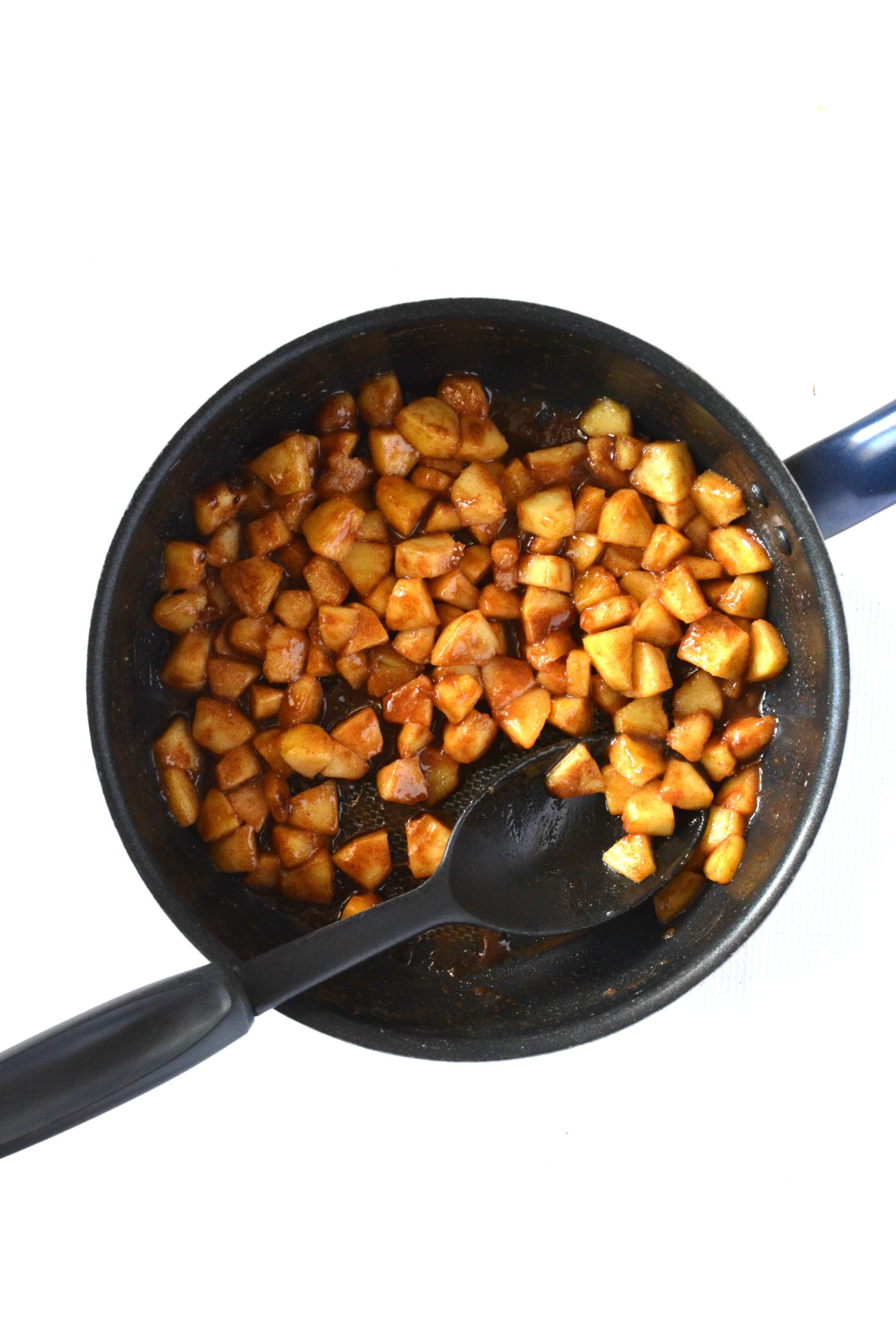 I always have a bag of apples on hand, and my family loves when I make cinnamon stewed apples for breakfast. I decided to keep my recipe for cinnamon stewed apples intact instead of making a true apple pie filling, but diced up the apples into smaller pieces since I knew I’d be serving this dish inside smaller mason jars. These apples come together in about 5 minutes, and they pair beautifully with the layer of no-bake cheesecake filling! 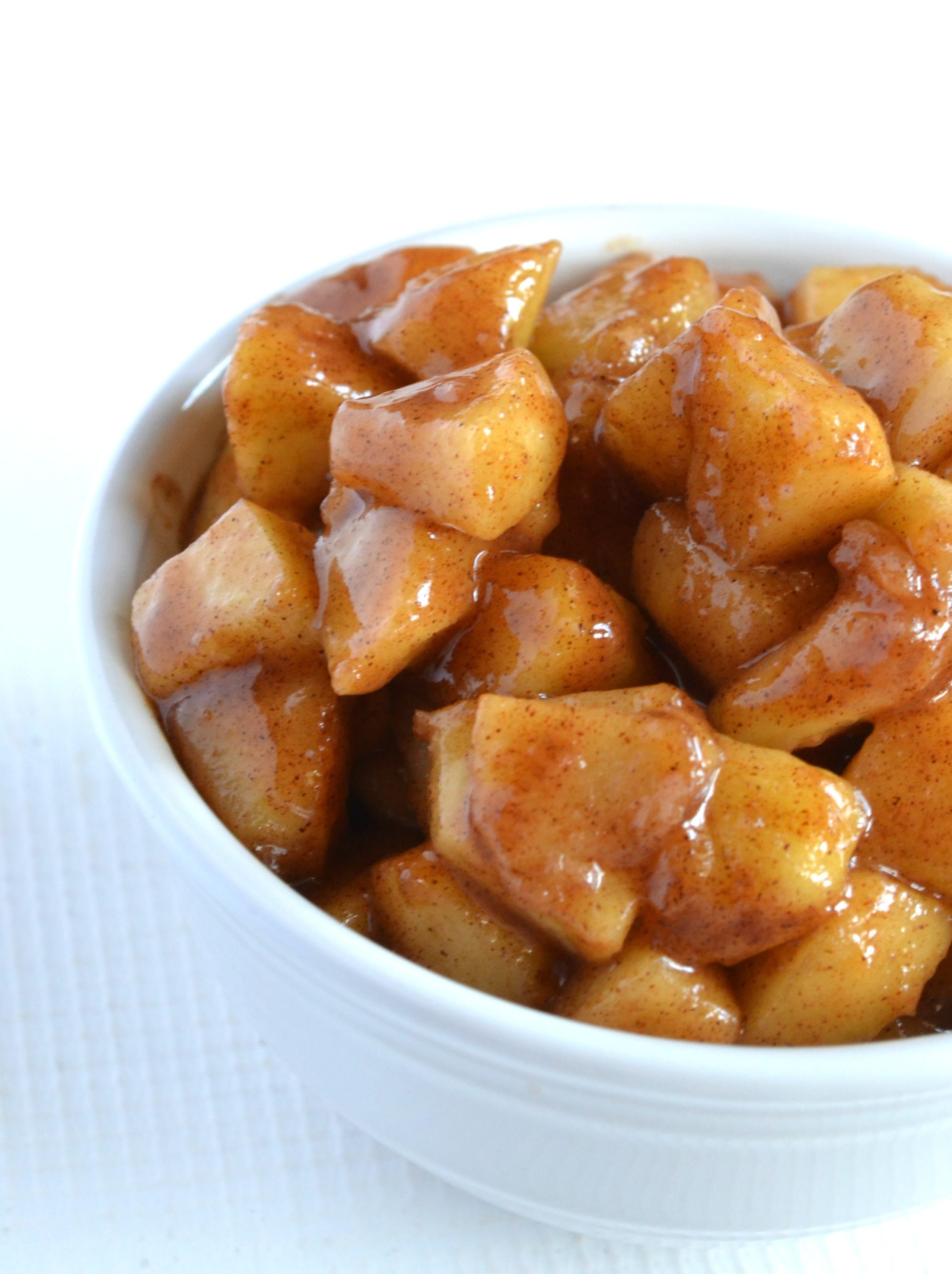 The cheesecake filling is simply cream cheese, powdered sugar and a smidge of vanilla extract. I allow the cream cheese to soften before mixing it all together. While the cream cheese is softening, you can go ahead and make the base layer of these trifles by tossing a few graham crackers and cinnamon into a blender or food processor. Combine the crumbs with a few tablespoons of melted butter and gently press the crumb mixture into the bottom of the mason jars. 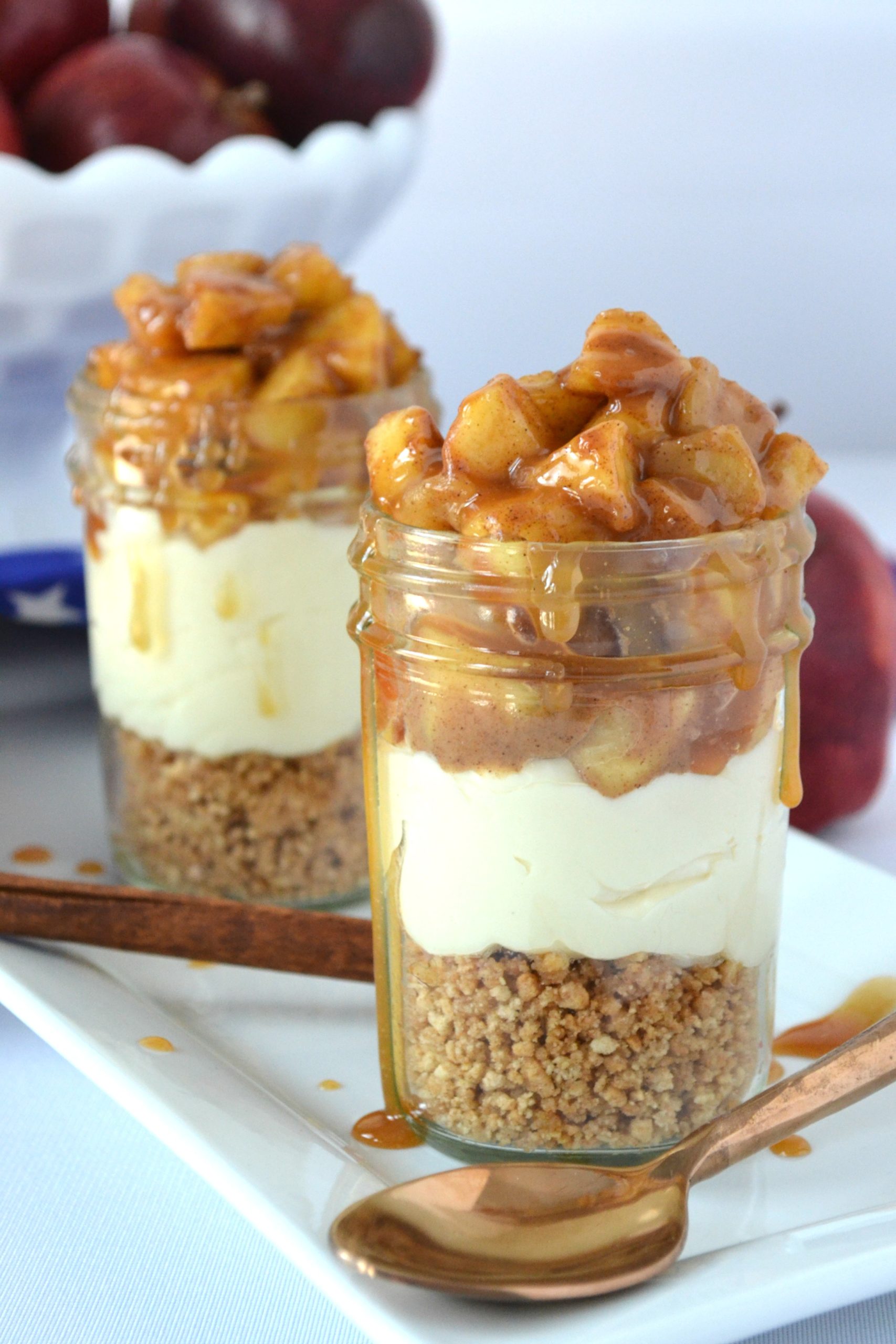 Transfer the cream cheese mixture into a piping bag or a plastic zipper bag with the tip trimmed off. While you can certainly always spoon the mixture into the jars, piping it in typically creates a nice and cleaner presentation. Once you’ve got your layer of cream cheese ready, it’s time to add the very best part – the apple pie filling! 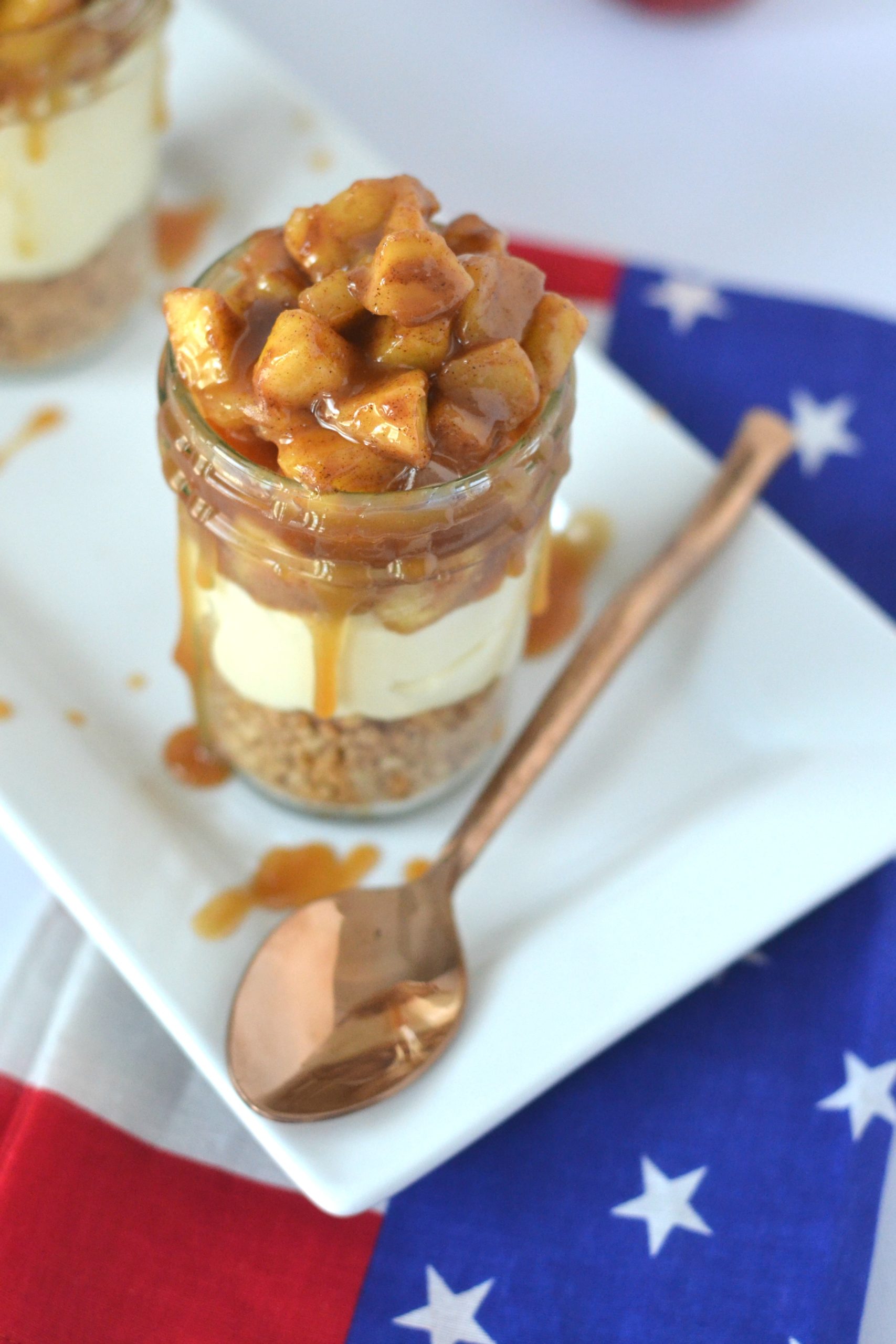 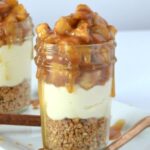 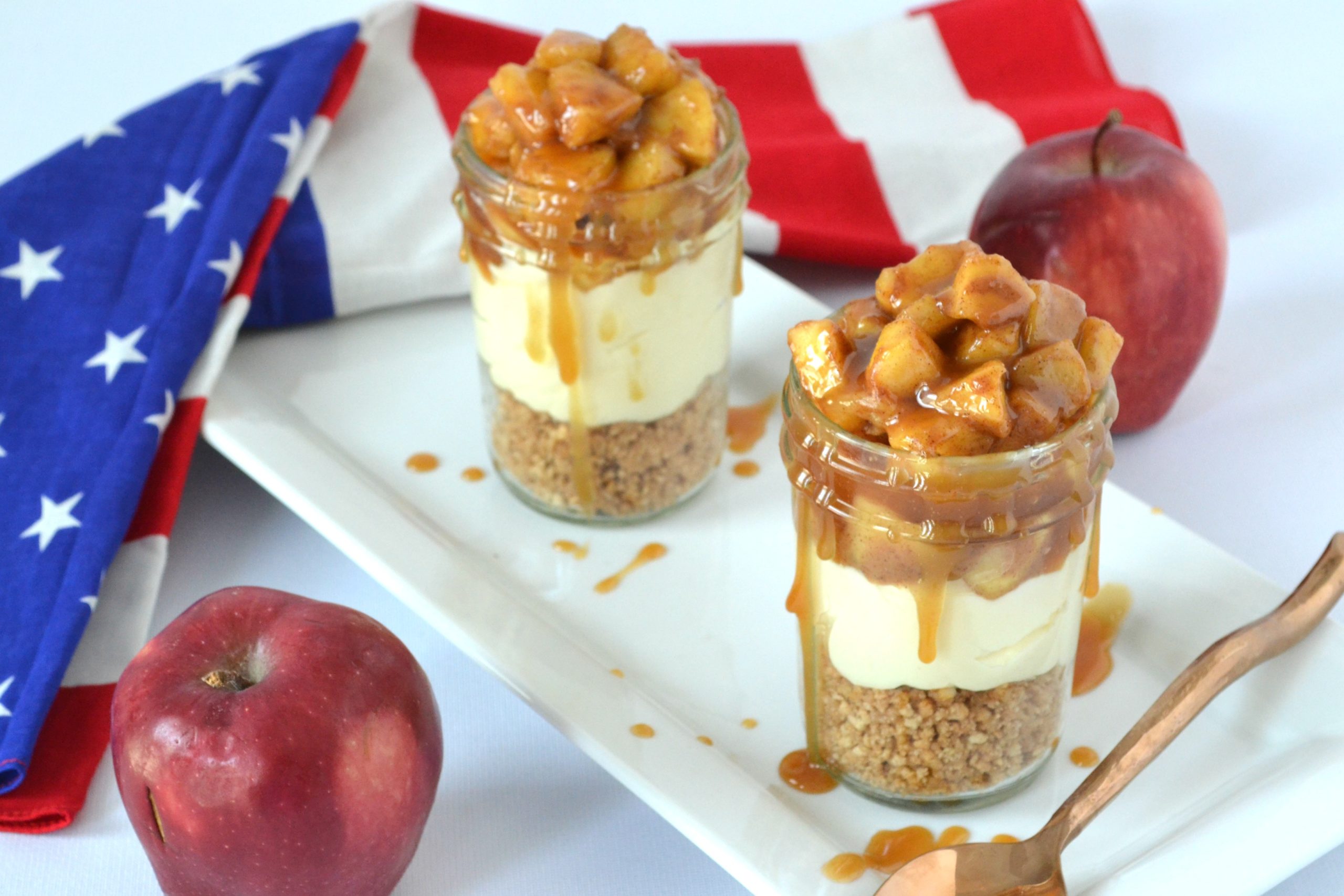 If you’re a fan of homemade apple pie on the 4th of July, switch things up a bit this year and serve the classic Americana dish cheesecake style! If you’re serving a large crowd, make sure you double or triple the recipe, because you’ll definitely be going back for seconds on this dish!

If you like this recipe, be sure to check out these other great recipes found right here on Southern Made Simple!