If you’re anything like me, you may have a hard time incorporating certain greens into your diet. I like most veggies, but I don’t just love them. It’s something I should really try to change about my tastes and my lifestyle, because vegetables are good for you! I just have a hard time straying from the norm. You know, peas, green beans, corn, and…yeah. That’s about it when it comes to actually making it to a dinner plate in this house. The only time I would ever eat spinach on purpose is on my Subway sandwich when it’s hidden amongst the lettuce and tomatoes. It’s like I said, I don’t dislike veggies, I just don’t really know to incorporate them into foods that I definitely love.

I tried hiding spinach in my smoothies for a little while. It lasted about a week. I could tolerate it in my smoothie, but I soon found out I was pregnant and then quickly found the smoothies to be absolutely repulsive. That’s pregnancy for ya! Now that I’m no longer pregnant, I still just can’t bring myself to drink them. However, I’ve now found a new way to incorporate spinach into my diet. Now, I’m not saying that dish is healthy at all. In a perfect world, it would be fat free...just like every other food would be, but let’s just celebrate one small victory at a time here. I’m eating lots of spinach these days, and it’s in the form of a hot, savory and cheesy bowl of deliciousness. Say hello to your new favorite dip recipe: Cheesy Bacon & French Onion Spinach Dip. 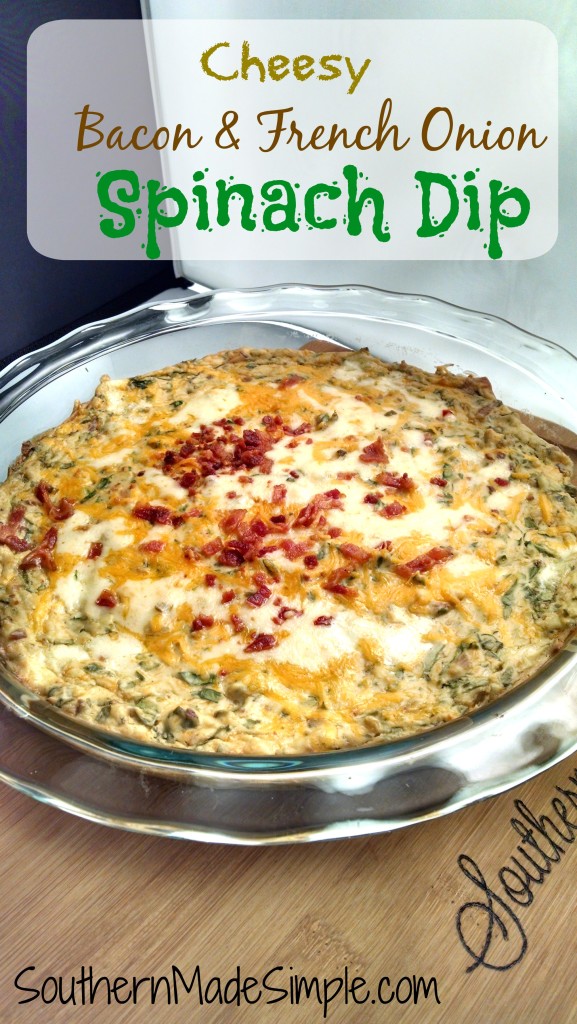 Forget what you think you know about spinach dip. Before I first made this dip, I thought of spinach dip as that super bland dip you can buy in the chip aisle next to that less than stellar cheese in a jar stuff. It’s typically served room temp and it’s pretty lackluster next to other dishes in a spread. This dip is anti that, y’all. But what about those regular hot spinach dips that are pretty good and not from a can? Forget ’em. They’re likely missing that special oomph. They’re probably missing that extra somethin’ somethin’ that you really want in a dip. You know, that va va voom! But not this dip, y’all. This one is in a league of it’s own….